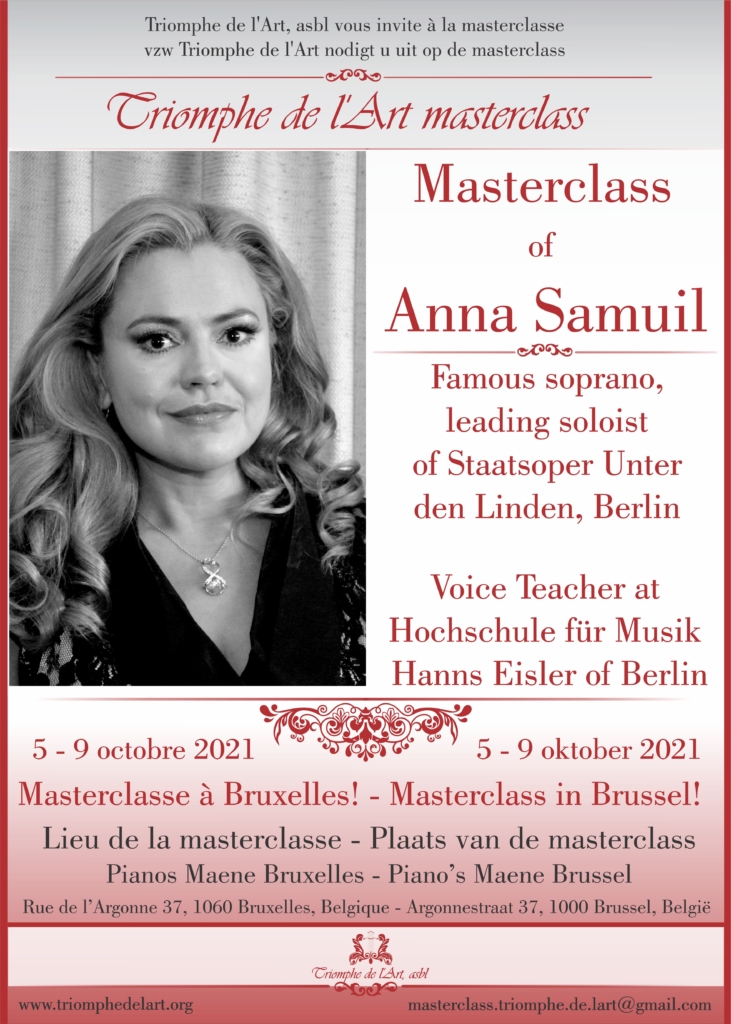 The soprano Anna Samuil is among the most sought-after Russian singers of her generation and has been steadily engaged as a soloist at the Staatsoper Unter den Linden in Berlin since 2004.
Ms. Samuil’s international career quickly brought her to some of the most important stages in the world:
La Scala in Milan (Donna Anna, Freia, Gutrune), the Metropolitan Opera in New York (Musetta), the State Operas in Munich (Violetta, Donna Anna), Dresden (Mimì), and Hamburg (Adina, Fiordiligi, Donna Anna, Violetta), the Opera Houses in Valencia (Donna Anna), Lyon (Maria in Mazeppa), Tel Aviv and Tokyo (Donna Anna, Rosalinde), Pittsburgh (Violetta, Tatiana), and Baltimore (Mimì), and the Grand Théâtre de Luxembourg (Violetta).
A frequently invited guest at international festivals, she has enjoyed considerable success at the Salzburg Festival (Tatiana), in Aix-en-Provence and Edinburgh (Violetta, Maria), at Glyndebourne, Verbier, and the Arena di Verona (Donna Anna), as well as at the Maggio Musicale Fiorentino (Verdi’s »Messa da Requiem«).
Extensive collaborations have paired Anna Samuil with renowned conductors such as Daniel Barenboim, Zubin Mehta, Sir Neville Marriner, Lorin Maazel, Antonio Pappano, Plácido Domingo, Dmitri Kitayenko, Kent Nagano, Manfred Honeck, Chung Myung-whun, Ivor Bolton, Kirill Petrenko, Vladimir Jurowski, Gustavo Dudamel, Dan Ettinger, Philippe Jordan, Asher Fisch, Andris Nelsons, Massimo Zanetti, and Stefano Ranzani.
Among the directors who have guided her career are Franco Zeffirelli, Peter Stein, Andrea Breth, Jonathan Miller, Bernard Uzan, Achim Freyer, Jonathan Kent, Claus Guth, Guy Cassiers, Lindy Hume, and Marthe Keller.
Anna Samuil was born in the Russian city of Perm.
She studied both violin and voice at the Moscow Tchaikovsky Conservatory and graduated with honors in 2003 from the voice program with Irina Arkhipova.
She has won prizes at major international competitions, including the »International Tchaikovsky Competition« and the »Glinka Competition« in Russia, the »Concorso Franco Corelli« and »Concorso Riccardo Zandonai« in Italy, as well as the »Klaudia Taev Competition« in Estonia and the »Neue Stimmen Competition« in Germany.
Ms. Samuil celebrated her opera debut in the role of the Swan Princess at the Moscow Stanislavsky Opera Theatre, where she was subsequently engaged from 2001 to 2004. During this time she appeared as Adele, the Queen of Shemakha, Violetta, and Gilda.
At the Staatsoper Unter den Linden in Berlin, she debuted in September 2003 as Violetta under the conduction of Daniel Barenboim and has since then been seen as Donna Anna, Fiordiligi, Contessa, Tatiana, Mimì und Musetta, Violetta, Elisabetta, Alice Ford, Adina, Micaëla, Rosalinde, Mařenka, Elsa, Eva, Freia, and Gutrune.
Anna Samuil has given orchestral concerts and recitals (with the pianists Elena Bashkirova, Matthias Samuil, and Semion Skigin) in the most important European centers of music, for example at the Royal Opera House Covent Garden and BBC Proms in London, the Palais des Beaux-Arts in Brussels, the Deutsche Oper am Rhein, the Waldbühne in Berlin, the Philharmonie in Cologne, the Bolshoi Theater in Moscow, the Philharmonie am Gasteig in Munich, the Konzerthaus in Berlin, the Jerusalem Chamber Music Festival and the Rheingau Musik Festival, the Norske Opera in Oslo, the festivals in Bad Kissingen and Colmar, and the Richard Wagner Haus in Bayreuth.
In addition, she has given concerts in other cities such as Avignon, Bratislava, Dresden, Krakow, Lisbon, Moscow, Prague, Saint Petersburg, Toulouse, Valladolid, und Vienna.
In recognition of her outstanding vocal and acting performances, Ms. Samuil was honored in 2008 with the »Daphne« audience award of the TheaterGemeinde Berlin.
Numerous recordings document Anna Samuil’s artistic activities.
CD and DVD releases so far include »Eugene Onegin« from the Salzburg Festival (Deutsche Grammophon), »Don Giovanni« from Glyndebourne (EMI) and as a concert recording from Israel (Helicon), »Das Rheingold« and »Götterdämmerung« from La Scala in Milan (Arthaus), and Britten’s »War Requiem« under the baton of Sir Neville Marriner and Beethoven’s Ninth Symphony with the West-Eastern Divan Orchestra under Daniel Barenboim (Decca). On the occasion of the Rimski-Korsakov Jubilee in 2008, the CD Angel & Demon appeared with songs and duets by the Russian composer.