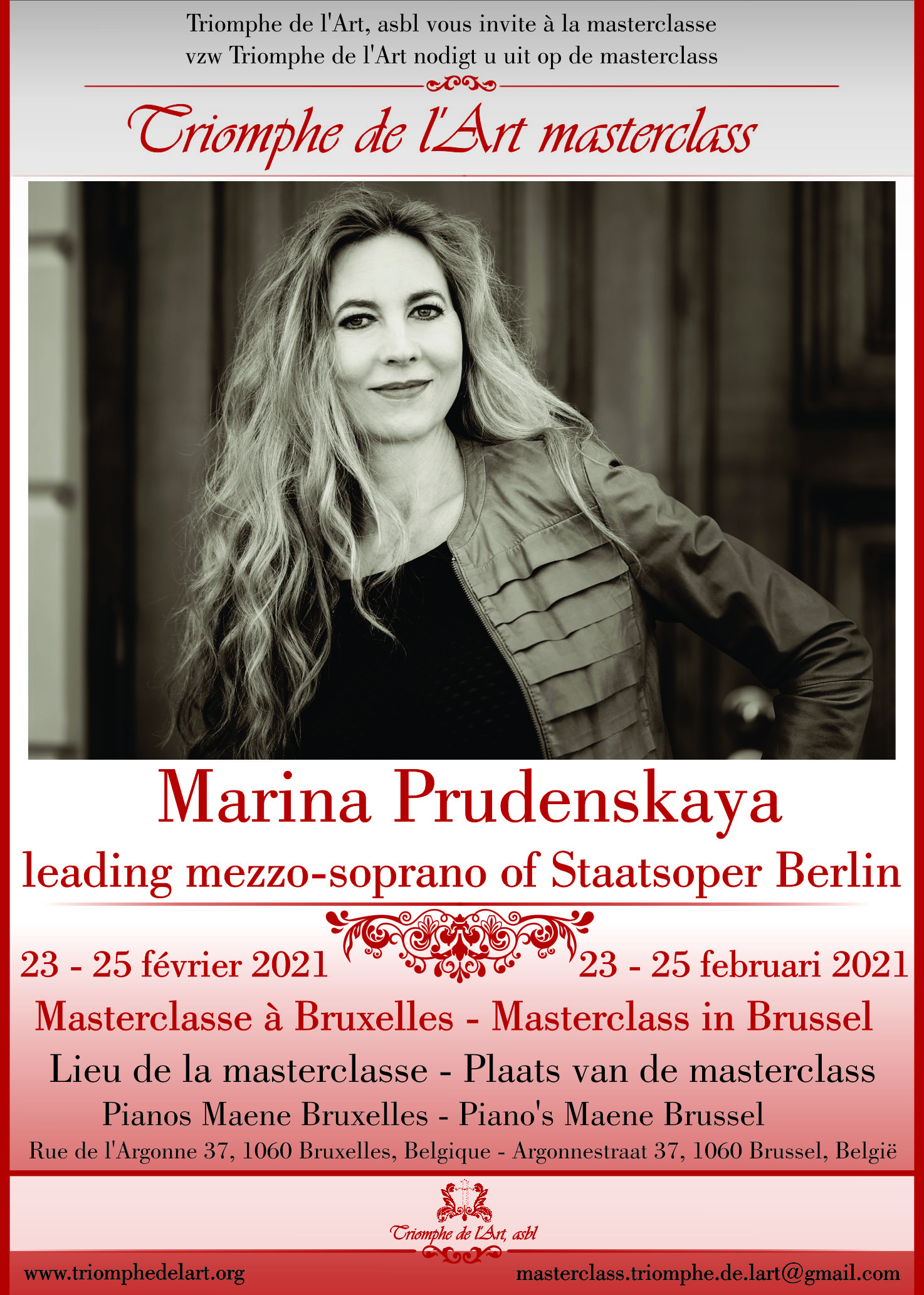 Active students will work with the master teacher and a pianist.

DO NOT MISS THE UNIQUE OPPORTUNITY TO IMPROVE YOUR VOCAL TECHNIQUE AND INTERPRETATION WITH A WORLD FAMOUS MEZZO-SOPRANO MARINA PRUDENSKAYA!

We are extremely honored to present Marina Prudenskaya

Detailed biography:
Her brilliant career began in 1998 at the Stanislavsky and Nemirovich-Danschenko music-theatre in Moscow. There she sang, in addition to the award-winning “Carmen”, the classical, lyrical roles in her field as “Pauline” in “Pique Dame”, “Ratmir” in Glinka’s “Ruslan and Lyudmila” and “Olga” in “Eugene Onegin”.
In 2000 she moved to the Nuremberg State Theatre. There she sang roles like “Dorabella” in “Così fan tutte”, “Nicklausse” in “Les Contes d’Hoffmann” and “Cherubino” in “Le nozze di Figaro”. Moreover, she gained her first experiences in the field of baroque with “Orfeo” in Gluck’s opera, “Clytemnestra” in “Iphigénie en Aulis” or “Bradamante”in Vivaldi’s “Orlando Furioso”. At the same time she was preparing her entry into the dramatic mezzo roles such as “Azucena” in “Il Trovatore” “Preziosilla” in “La forza del destino” and “Mère Marie” in Poulenc’s “Dialogues of the Carmelites”. This wide range of her repertoire, distinguishes the singer to this day and makes her a sought-after mezzo-soprano.
In 2005 Marina Prudenskaya was hired as ensemble member at the Deutsche Oper Berlin and sang, amongst others, “Arsace” in Rossini’s “Semiramide”, “Hansel” in “Hansel and Gretel”, “Preziosilla” in “La forza del destino” and “Fricka”, “Waltraute” and “Erda” in “Der Ring des Nibelungen”. In Katharina Wagner’s “Il Tritico” production she sang “La Zia Principessa” and “Zita”.
In 2007 she joined the ensemble of the Staatsoper Stuttgart. There she sang “Disinganno” in Handel’s “Il Trionfo del Tempo e del Disinganno”, “Bradamante” in “Alcina”,”Cecilio” in Mozart’s “Lucio Silla”, “Rosina” in “Il barbiere di Siviglia”, “Adalgisa” in Bellini’s “Norma”, “Federica d’Ostheim” in Verdi’s “Luisa Miller”, “Amneris” in “Aida”, “Carmen” in “Carmen”, “Brangäne” in “Tristan and Isolde”, the “Octavian” in “Der Rosenkavalier”, the “Fenena” in “Nabucco” and ‘1. Norn”and “Waltraute” in” Götterdämmerung “.
Since 2013 she is permanent ensemble member of the Staatsoper Berlin. There she performed “the 2.Norn” and “Waltraute” in Wagner’s “Gotterdammerung”, “mezzo-soprano” in Helmut Oering / Henry Purcell’s “Ashes Moon or The Fairy Queen”, “Ulrica” in Verdi’s “Un ballo in maschera”, “Azucena” in “Il Trovatore” in a new production by Phillip Stölzel and under the direction of Daniel Barenboim; “Eboli” in “Don Carlos”, the “Ljubascha” in Rimsky-Korsakov’s “The Tsar’s Bride”, the “Venus” in “Tannhäuser”, a new production by Sasha Waltz; the “Composer” in Richard Strauss’s “Ariadne auf Naxos ” and “Herodias” in Salome-both new productions by Hans Neuenfels; “Marie” in Alban Berg’s “Wozzeck”, “Il Disinganno” in Handel’s “Il Trionfo del Tempo e del Disinganno”. She sang also “Gertrud” in “Hänsel und Gretel”, a new production of Achim Freyer , “Neris” in “Medee” , Cherubini and “Euphrat” in a World Premiere of “Babylon” , composed by Jorg Widmann.
Her guest engagements at other famous opera houses make her one of the world’s most sought-after mezzo-sopranos. So she sang “Lady Macbeth” in Macbeth in Antwerpen, “Ljubascha” Rimsky-Korsakov in “The Tsar’s Bride” under the baton of Daniel Barenboim and directed by Dimtri Tcherniakov at the Teatro alla Scala in Milan. As “Ulrica” in “Un Ballo in Maschera” she was at the Teatro alla Scala in Milan under the direction of Damiano Michieletto and under the direction of Daniele Rustioni. At the Mariinsky Theatre, Saint-Petersburg, at the National Theater in Mannheim, at the Hessian State Theatre, Wiesbaden, at Theater Bielefeld and at the Hamburg State Opera she excelled also in the role of “Ulrica”.
She interpreted “Amneris” in “Aida” at the Washington National opera, directed by Francesca Zambello, at Teatro Municipal de Santiago de Chile , Teatro Real Madrid , in Palau de les Arts Valencia , Music Theater Essen under the baton of Stefan Soltesz, at the Teatro Massimo, Palermo, at the Hamburg State Opera, at the Astana Opera, Kazakhstan by a orchestration of Franco Zeffirelli under Keri-Lynn Wilson, at the Grand Theatre Hong Kong Cultural Centre, the Opera House NCPA (National Centre for the Performing Arts in Beijing (Beijing), directed by Francesco Micheli and under the button of Zubin Metha, and the Chemnitz Opera House.
She performed “Preziosilla” in a Gala Performance of ” La Forza del destino ” at the International May festival in Wiesbaden.
She sang “Marfa” in ” Khovanshchina” in Stuttgart, “Eboli ” in “Don Carlo” in Zürich Opera House, the role of “Azucena” in Royal Opera, London under the baton of Gianandrea Noseda and in Opera de Monte Carlo under Daniel Harding. She interpreted the “Orlovsky” in “Die Fledermaus” at the Opéra de Nice, “Ernestina”, ” L’equivoco stravagante ” – Rossini, at the Rossini Opera Festival in Pesaro. The “Romeo” in Bellini’s “I Capuleti i e Montecchi” at the Staatsoper Hannover. The role of “Ariodante” in Handel’s homonymous opera at the Theater Basel. She played “Disinganno” in Handel’s “Il Trionfo del Tempo e del Disinganno” at Stadtheater Bern, the “Mary” in “The Flying Dutchman” and “Erda” in Pierre Audis Inzeneierung “Der Ring des Nibelungen” at De Nederlandse Opera Amsterdam, conducted by Hartmut Haenchen. In Bellini’s “Norma” she sang “Adalgisa” at the Festival Castell Peralada / Spain. At the Maggio Musicale of Florence and the Palau de les Arts in Valencia she sang under Zubin Mehta, the “Flosshilde” and the “Sigrune ” in “Ring der Nibelungen” directed by La Fura dels Baus.