The masterclass is given by the internationally acclaimed soprano with leading opera houses and orchestras, Chen Reiss.
Do not miss this exclusive masterclass in Brussels, Belgium.
The number of places is limited! 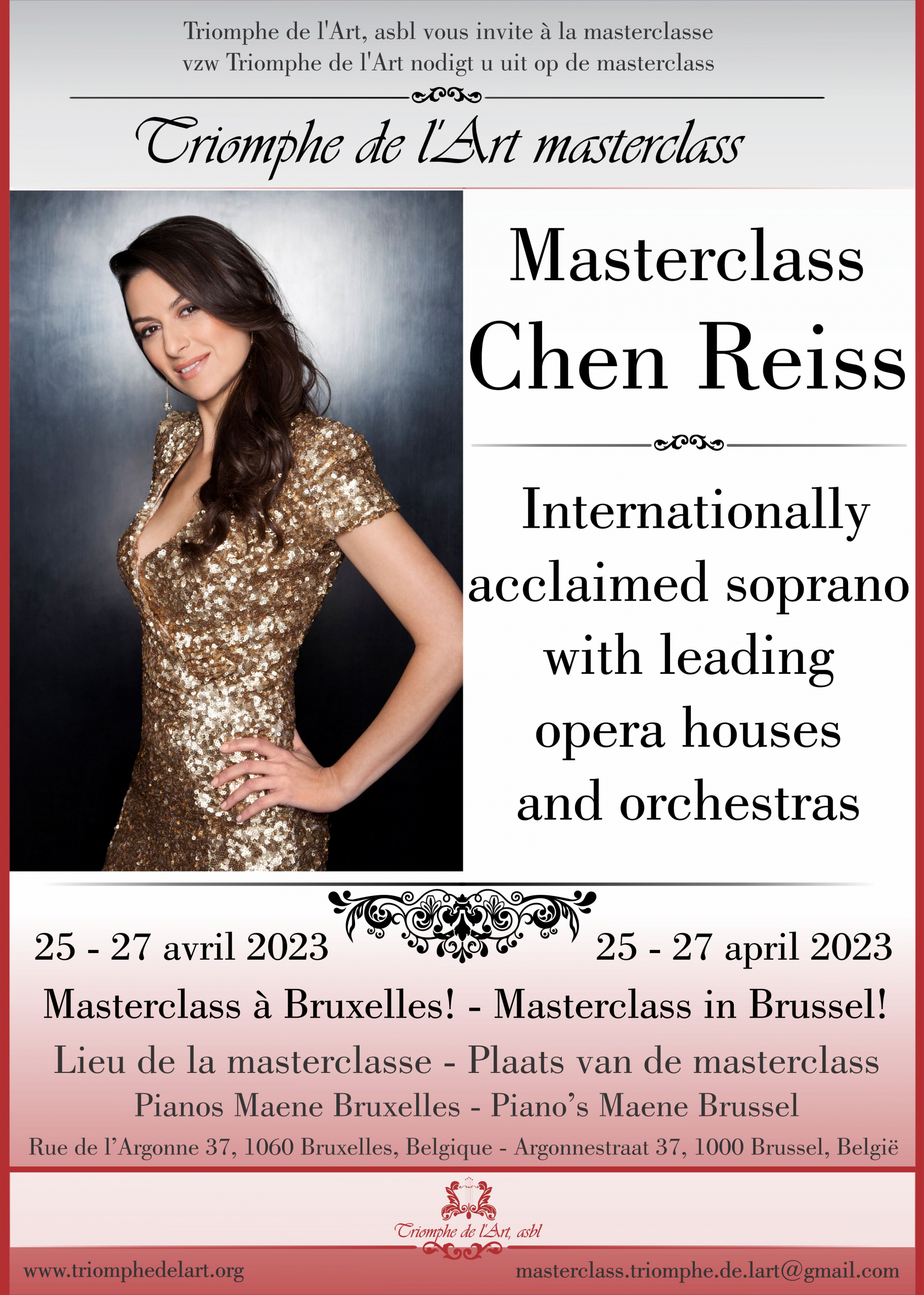 Active students will work with the master teacher and a pianist. The masterclass includes 3 lessons of 45 minutes with Chen Reiss and a pianist.

With “immaculately produced and enticing tone matched by superb musicianship” (Opera News, USA), soprano Chen Reiss is a regular guest with major institutions including the Vienna State Opera, Teatro Alla Scala, Royal Opera House Covent Garden, Royal Concertgebouw Orchestra, BBC Proms, Lucerne Festival, the Israel and Munich Philharmonic, the Chicago Symphony, Los Angeles Philharmonic, Orchestre de Paris, as well as at Vienna’s Musikverein, Wigmore Hall, Philharmonie Berlin, and Palais des Beaux-Arts in Brussels. She counts among her collaborators such conductors as Semyon Bychkov, Zubin Mehta, Daniel Barenboim, Gustavo Dudamel, Christoph Eschenbach, Daniele Gatti, Manfred Honeck, Paavo Järvi, Vladimir Jurowski, Antonio Pappano, Lahav Shani, Christian Thielemann and Franz Welser-Möst. Her operatic repertoire includes Mozart and Handel heroines, Gilda (Rigoletto), Adina (L’Elisir d’amore), Zdenka (Arabella), Sophie (Der Rosenkavalier) and the title role in The Cunning Little Vixen. Her concert repertoire spans from Bach and Haydn, through Rossini and Mahler, to Berg and Strauss. She has recorded widely from Cimarosa and Salieri to Fauré, Mahler, Stravinsky and Lehar, and in 2020 releases an album of rare Beethoven arias and songs. In 2014 Reiss was invited to sing for Pope Francis during the Christmas Mass, which was broadcast worldwide. With the Vienna Philharmonic she was the guest soloist at the 30thanniversary celebrations of Tokyo’s Suntory Hall, and with the Orchestre National de France she took part in the 2019 Bastille Day ‘Concert de Paris’, televised live from Paris’s iconic Eiffel Tower. Accompanied by the Berlin Philharmonic and Sir Simon Rattle, she sang the soundtrack to “Perfume: the Story of a Murderer”. Chen has been giving Masterclasses regularly since 2014 in the UK, Germany, Israel and more.